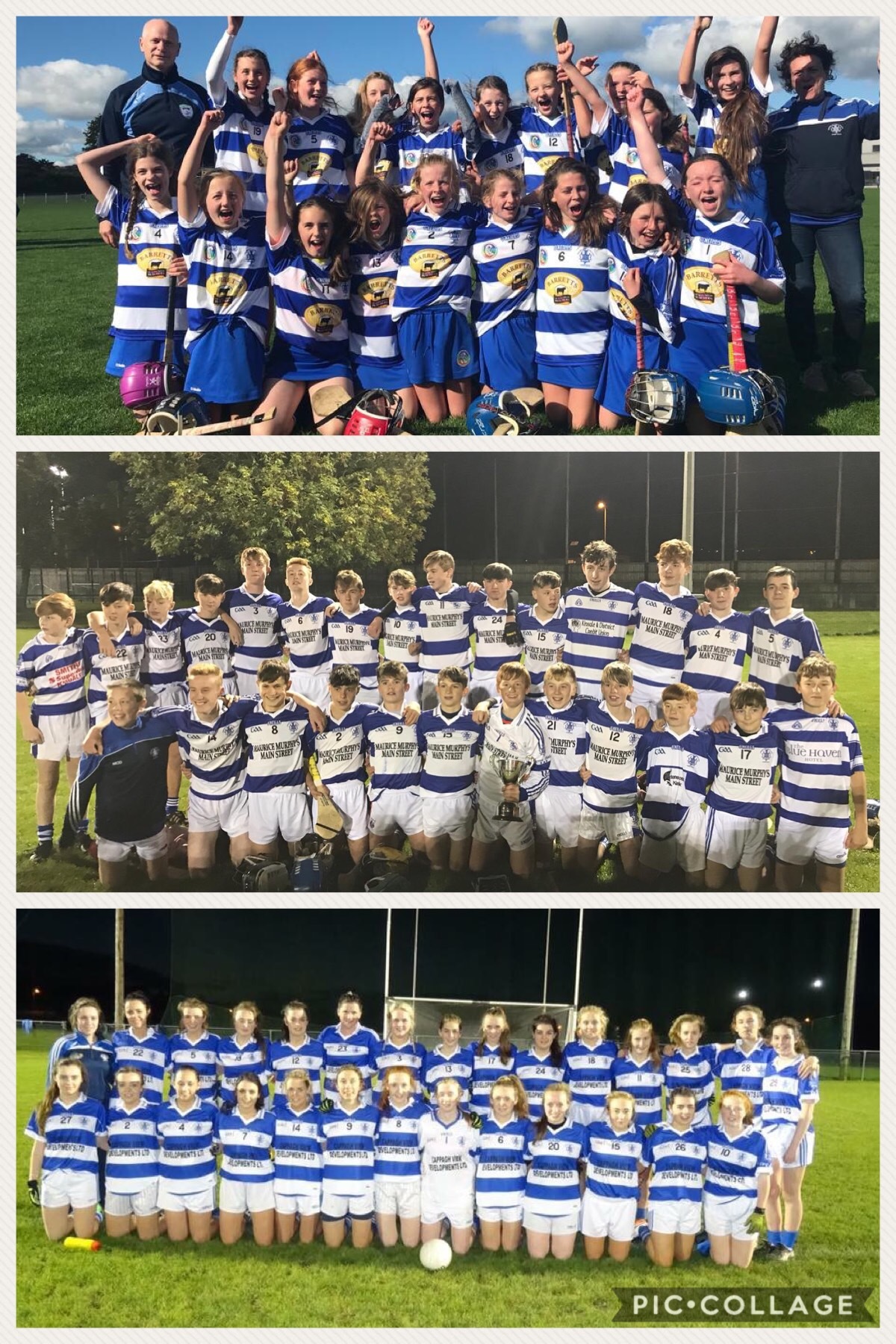 Friday, Lights, Action.......Friday 5th October, Under Lights at the fantastic facilities at St Finbarrs Gaa, Togher, supporters gathered under the leafy boughs at the pitchside - the promise of an Action Packed County A Under 14 Boys Hurling Final was eagerly awaited.

The game started with the expected flurry of frantic play by both teams as each tried to settle the nerves.

Fr O Neills put the first score on the board, but it was soon equaled by Kinsale. There wasn’t much between the teams each holding their own in a low scoring half, 3 points apiece. Kinsale however towards the latter of the half popped over 3 points to take a small lead at the HT whistle. HT K 0-6  FON 0-3.

Kinsale got into their stride in the second half and despite some good play by Fr O Neills, Kinsale started to dominate and pulled away with a great well-worked goal and well taken points. Kinsale added a second goal and with some well pointed frees were stretched ahead with approx. 10 mins to go.  However Fr O Neills never gave up and rallied bringing pressure to bear around the Kinsale goal which resulted in a goal for them.  They added another point to their tally but the Kinsale lads drove on and secured a great victory for the club FT Score 2-11 to 1-04.

It was great to see so many supporters on the sidelines to shout on their encouragement for this young team and it no doubt played its part in helping the team towards this County win. Thank you for your support.

To the fantastic group of coaches who have been working with this team from U6 to U14 we salute you and say thank you for your tireless commitment and dedication to this great team - It really is above and beyond the call of duty. Many thanks to Con O Callaghan, TJ Nolan, Glynn Aherne, Dave Ganly, Sean O Callaghan.

And Finally, well done to the entire panel of players who worked and trained hard seeing off Owen Gaels, Ahan Gaels and Bandon who they beat in the West Cork Final and Fermoy in the County Semi to stake their place in the County final. A great group of lads, who are not only teammates but also friends, who don’t just play together as a team, but play for each other - a special bond between them all, playing as 'one'.  The future is very bright for this panel of brilliant young men.

Kinsale GAA continued its winning streak this weekend with our Under 12 Girls Camogie Team winning their Divisional League Final at Castle Road, Blackrock on Saturday 6thOctober.

This History Making girls Under 12 Team have secured the first ever Divisional Camogie League win for the Club.  What a tremendous achievement for this group especially when you consider that Camogie in Kinsale GAA is only 3 years old!! Unbelievable stuff. The first of many wins no doubt.

Well done to all these amazing players and their dedicated coaches.

Thanks to everyone who travelled to support the team and to all the parents for their brilliant support.

The Senior Ladies Football Team traveled to Mallow today to contest their third (in a row) Munster Semi-Final Football Championship V Cappawhite, Tipperary. They emerged victorio on a scoreline of 6-13 to 2-8!

The phenomenal support for this team over the last few years has been just incredible. so lets get behind them on their final step in next weekend‘s Munster final!! They will take on Comeragh in the Munster Plate Senior Final. More details to follow!! 🔵🏐🔵🏐

Give Respect, Get Respect

It’s never been easier to register with Kinsale GAA Club.  Our new On-Linefacility is now available to use - simply click on the website link above and follow the easy steps!